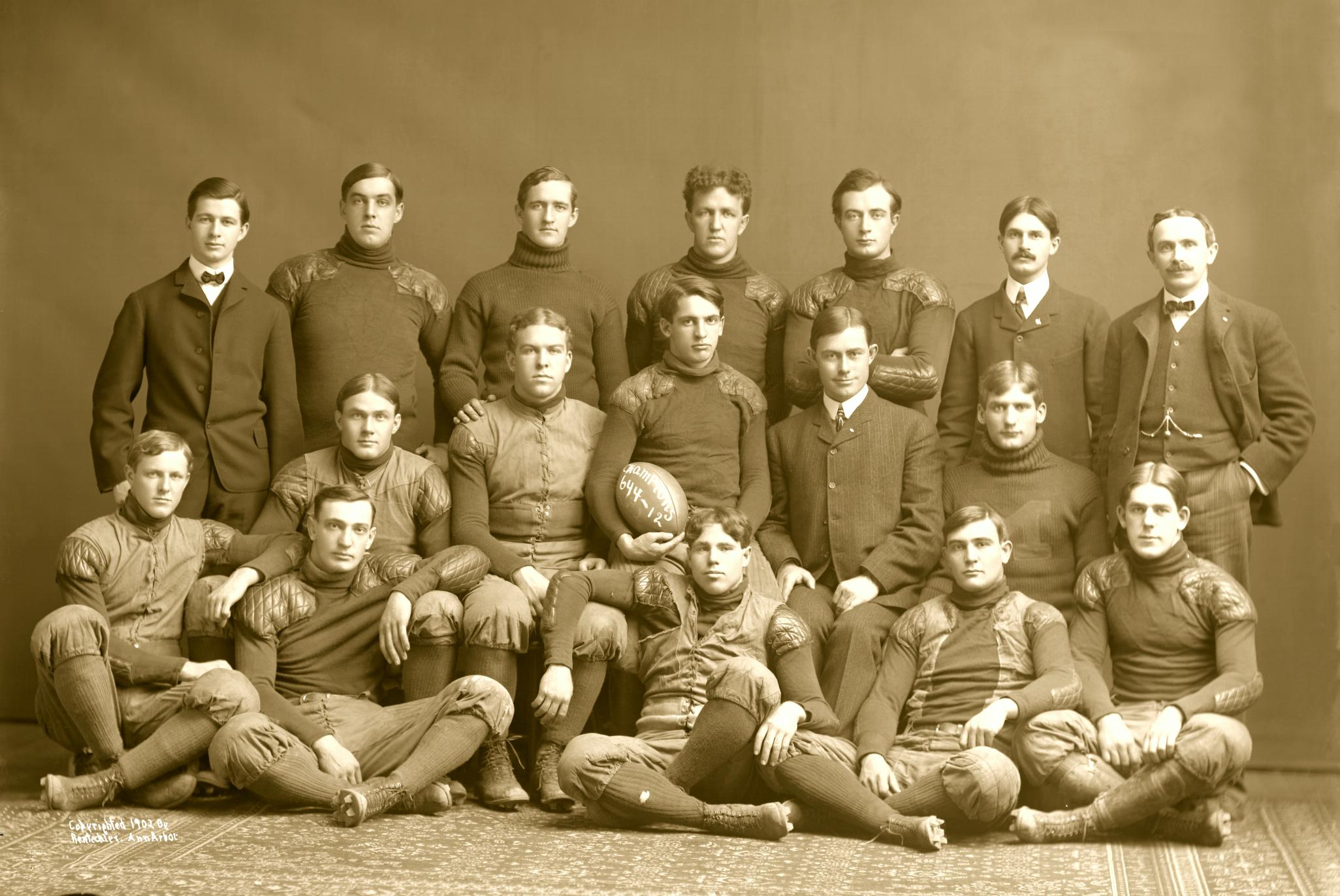 Posted on October 7, 2020 by Barry Gallagher

(Note-The 1902 Michigan Wolverines, shown above, won the conference and national championship. They also destroyed Michigan Agricultural College (MAC) by a score of 119-0. Photo courtesy of the Bentley Historical Library at The University of Michigan.)

The second game between The University of Michigan and Michigan Agricultural College (MAC) was scheduled for Regent’s Field in Ann Arbor on Wednesday, October 8th. Yes, you read it right, a Wednesday! This contest was the third game of Michigan’s eleven game season. Michigan had already defeated Albion and Case by a combined score of 136 to 6. So, they headed into this game riding a thirteen-game winning streak. MAC lost their opening game against Notre Dame (33-0), but won against Detroit by a score of 11-0. The big question was, “Were the Aggies ready to compete with the mighty Wolverines?”

I could not identify any particular issues that  added any intensity to the level of “in-state hate” in 1902. The Aggies were still looking for respect on the football field and Michigan was looking to keep rolling over every team that dared to step on the same field with Yost’s Wolverines. Second year coach, Fielding Yost had already earned a reputation for running up the score on his opponents with the worst being a 128-0 thrashing of Buffalo in 1901. The Aggies probably arrived in Ann Arbor with high hopes, but also some trepidation.  Would they be able to stop, or at least slow down, Yost’s “Point-a-Minute” juggernaut?

The second game definitely turned out worse than expected for the Aggies, much worse! Yes, the Aggie players may have thought that their chances for an upset were slim, but a final score of 119-0 was probably quite a shock! The Aggies were probably relieved when they learned that two of Michigan’s stars (Willie Heston and Everett Sweely) would not play on October 8th.) However, it didn’t matter. The substitutes stepped up nicely and contributed to a display of “fast break” football that stands as one of the greatest games in Michigan Football history. Yes, on this day, Michigan destroyed Michigan Agricultural! There is no way to sugarcoat this loss.

Eight different Michigan players scored at least one touchdown and kicker James Lawrence probably had a sore toe from kicking 19 points after touchdown. Albert Herrnstein (7) Herb Graver (3) and Paul Dickey (3) each had more touchdowns than the Aggies had first downs (3). It was just ugly. Here is the box score for the game:

As bad as the game turned out, it actually could have been worse! The rules of the day called for the game to be played in a pair of twenty-minute halves. Yost and Denman agreed to halt the game with two minutes remaining. Michigan’s “point-a-minute” team actually scored 119 points in 38 minutes so they averaged 3.1 points per minute in this game  ̶  ouch! Also, a touchdown was only worth five points at this time, but increased to six points in 1912. If the scoring rule had changed sooner the final score would have been 139-0!

Al Herrnstein scored 7 touchdowns in Michigan’s 119-0 blowout win over MAC in 1902. Photo courtesy of the Bentley Historical Library at The University of Michigan.

It Could Have Been Worse

As bad as the game turned out, it actually could have been worse! The rules of the day called for the game to be played in a pair of twenty-minute halves. Yost and Denman agreed to halt the game with two minutes remaining. Michigan’s “point-a-minute” team actually scored 119 points in 38 minutes so they averaged 3.1 points per minute in this game  ̶  ouch! Also, a touchdown was only worth five points at this time, but increased to six points in 1912. If the scoring rule had changed sooner the final score would have been 139-0!

This was the last time that Yost would see Denman since he was replaced at the end of the season. So, after two games Michigan had outscored the Aggies by one hundred and fifty-eight points and the Aggies had nothing but goose eggs in the scorebook. Definitely, a rough start for the boys from East Lansing. The Aggies had to be wondering if they would ever be able to match the mighty Wolverines on the football field. (Of course, they no longer think that way!)

As it turned out the second game between Michigan and MAC had some interesting “firsts” and a couple milestones as well. Here they are:

This was also the last time that both teams played on Regents/Old Ferry Field. It was also the last time they played on a Wednesday. Again, this was the most lopsided game in the history of the two-game series, but it would never again be this bad for the Aggies. Some tough games were still to come, but Michigan Agricultural College would make some changes and come back for more. Defeated yes, discouraged no!

The Wolverines romped through their remaining games and finished the season with another perfect record of 11 wins, 0 losses and 0 ties. Although the Aggie game was the season scoring high, ost’s team did score 107 points against Iowa and hammered Ohio State by a score of 86-0. Michigan finished the season with 644 points and only allowed 12 points. Yes, Michigan destroyed Michigan Agricultural, but they also blasted everybody else! Yost’s footballers won their second straight conference championship and were named national champions for the second straight season. Fielding Yost was on a roll and some people wondered if Michigan would ever lose another game.

The remainder of the Aggies season did not go nearly as well. The boys from East Lansing were able to bounce back nicely form the Michigan loss and win two straight. The second game was against the Michigan freshman team. They only defeated the Wolverine Frosh by a score of 2-0. The game does not count in the overall “series” results, but a win is a win, right? MAC lost three of their last four games and finished the season with a record of 4 wins and 5 losses.

Like you, I am really looking forward to the start of the Michigan Football season on October 24th. Of course, Halloween (October 31st) will be a very BIG game for both Michigan and Michigan State. Go Blue, Beat State!