This site is the “brain child” of two very passionate Michigan football fans. Barry Gallagher, and his son Marty, share a common bond about their love for the unique history of Wolverine football. In fact, they are the first father-son team to write books about the history of Michigan football. Marty was the first to write about the Wolverines when he published his book titled The Heisman and The Michigan Man in 2011. His book details the three Michigan men who won the Heisman Trophy and the eighteen who finished in the top ten of the voting over the years. My book came along in August 2014. It is titled 21-194-13, Michigan Football’s Greatest Era. This book takes a closer look at the modern history of Michigan football. It puts the amazing twenty-one year tenure of Bo Schembechler in perspective compared to the twenty-one years before and after his work at Michigan. 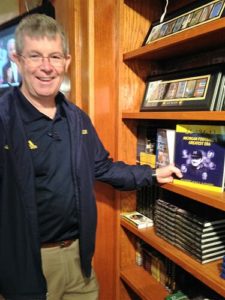 The purpose of this website is simple. It is a daily celebration of the names, games and events that make up the history of the winningest program in college football history. The story of Michigan football is a fascinating tale that started in 1879 and continues to this day. Personally, we think all Michigan football fans should have a daily dose of Big Blue football just to keep things in focus. So, that’s what this site is designed to do.
We will tell the history of Michigan football one day at a time through the stories of the players, coaches, events and games that have defined the Wolverine football tradition. The focus is on the people who actually played, coached and gave their all on the football field. It is not about pre-season or pre-game hype and it contains nothing about the recruiting of future Wolverines. There are plenty of informative sites that do a commendable job of providing current information on these topics. 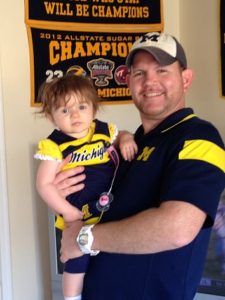 Marty Gallagher and his daughter showing support for the Wolverines! Marty is a lifelong Michigan fan and author of 98-21-2 THE STORY OF THE HEISMAN AND THE MICHIGAN MAN.

This site has been four years in the making. We have compiled thousands of data points that will allow us to connect a player, coach or game to every date on the calendar, including February 29 when Leap Year rolls around. We will use that information to connect you to an important time in Michigan football history. Every day will be a new opportunity to learn about a different player, or players and a different time in the fifteen decades of Big Blue football history.

Barry Gallagher was born in Pontiac, Michigan and spent most of his first thirty years living and working in southeastern Michigan. He is a graduate of Eastern Michigan University where he earned a Bachelors Degree in Secondary Education and a Masters Degree in Educational Administration. From 1973 to 1983 he worked as a teacher, coach and school administrator and also served in the U. S. Army Reserve. In 1983 he went on active duty served in various positions as a Military Police Officer and Human Resources Officer and retired as a Colonel in 2003.  He is very happily married, the father of five children and grandfather to twelve of his favorite children in the whole world. He enjoys spending time with his family, reading, writing, public speaking, following the Michigan Wolverines and the rest of his favorite college and professional sports teams.  In addition to 21-194-13, Michigan Football’s Greatest Era, he also authored two other books, The Secrets of Life Power and How To Get A Kick Out Of Coaching Youth Soccer. With the publication of his latest work, Gallagher joins his son, Marty (author of The Story of the Heisman and The Michigan Man), as a member of the first and only father-son team to write books about Michigan Football. They have plans to collaborate on at least five additional titles that tell untold stories about the history of the legendary Wolverine Football program.

Marty Gallagher was born in Mount Clemens, Michigan, but grew up as an “Army Brat” which meant he lived in lots of different places and went to many different schools. When Marty was seven years old he moved to Ann Arbor, Michigan to a home that was less than one mile from Michigan Stadium. The Good Year Blimp would fly over the house on football Saturdays and Michigan Football players would show up at his school for assemblies and special events. Marty received a Presidential Fitness Certificate from a young man named Jim Harbaugh in 1986 so that pretty much made him a Michigan Football Fan for life!
He was an excellent high school athlete and enjoyed success on the soccer field, the track and the basketball court. However, his passion was football and his favorite team was the Michigan Wolverines! Marty was an excellent high school football player, but he was simply too small to play at the college level. He didn’t get recruited to play football, but landed a competitive ROTC scholarship from the United States Army to attend Xavier University in Cincinnati, Ohio. He graduated with a degree in Business and was commissioned as an Army Officer in May 2001. Marty served in the 82nd Airborne Division for four years which included a deployment to Iraq. After completing his military obligation, he settled in Raleigh, North Carolina where he works as a project manager. He is happily married. Marty and his wife have one small child and one very big dog to keep them busy.
In the midst of a very busy life, Marty managed to follow his passion for Michigan football and was able to achieve a lifetime dream of publishing a book about his favorite college football program. His book is the only book about Michigan football that tells the story of the three men who won the trophy and the others ones who were good enough to get some serious votes.
Marty is totally committed to the success and growth of this website. In addition to writing some of the daily blogs, he will also hunt down pictures and videos to help bring the site to life. He is also working with his dad to create four additional books that tell untold stories about the Michigan football program.