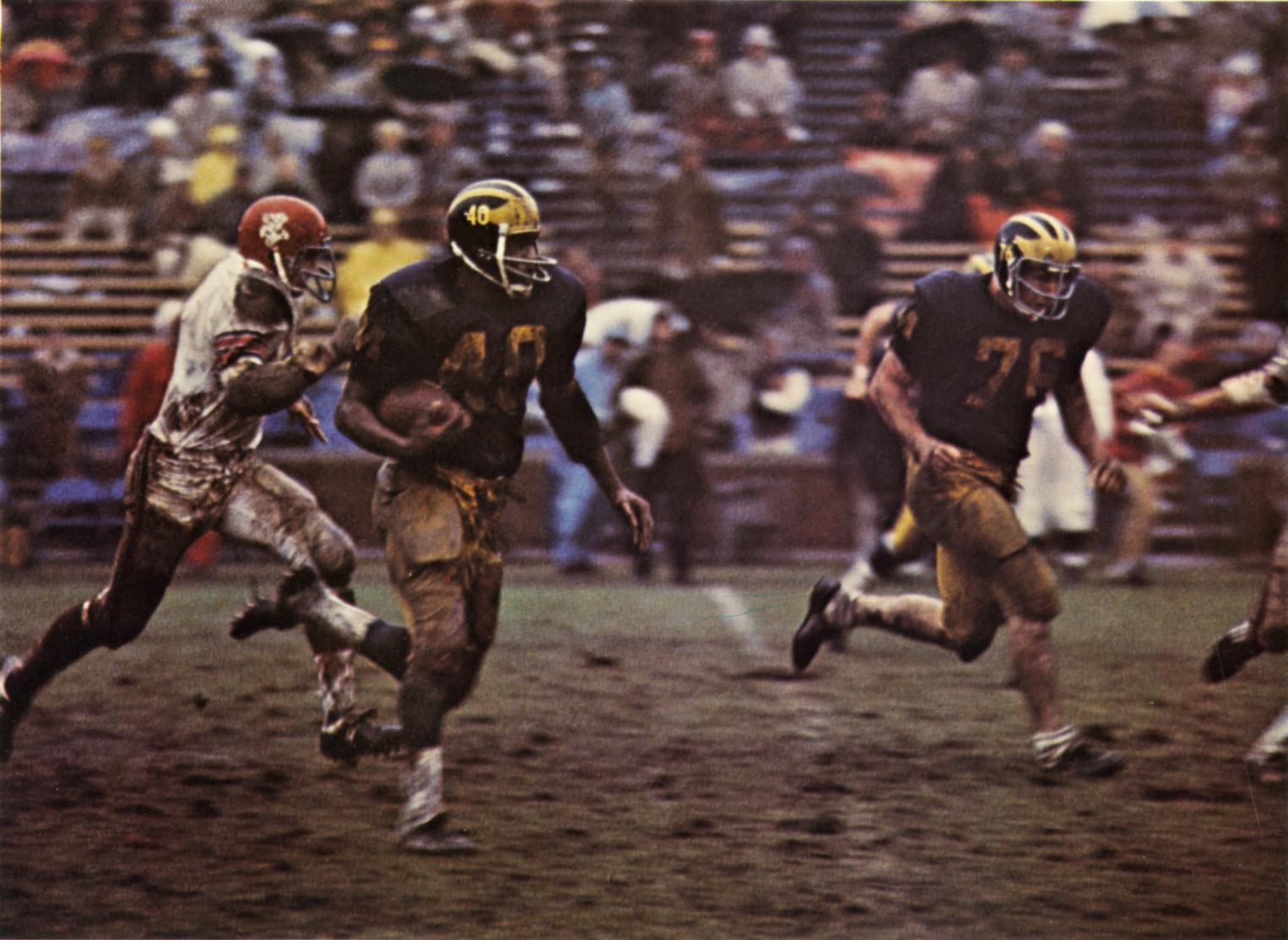 Today is a great day to celebrate the happy birthday anniversary of a Wolverine record setter named Ron Johnson. According to the Wikipedia article linked below, Ronald Adolphis “Ron” Johnson was born on this day in 1947 at Detroit, Michigan. He grew up in Detroit and attended Northwestern High School where he became a star athlete on the football and baseball teams. In 1965, Bump Elliott offered Johnson a chance to play for the Michigan Wolverines and Ron accepted. The rest, as they say, is history!

(Note - Ron Johnson (#40), shown above, had his greatest day against Wisconsin in 1968. Wow! Photo courtesy of the Bentley Historical Library at The University of Michigan.)

Part I. Wolverine of the Day: Ron Johnson

Ron Johnson arrived in Ann Arbor in the fall of 1965. Like every other freshman on the team, he practiced and did his best to learn how to play “Michigan Football.” Coach Elliott had some experienced seniors at running back in 1966, so, Ron Johnson did not play much in 1966. He only had 12 carries for 44 yards. However, he did earn a letter on a team that finished with a final record of 6 wins and 4 losses.

The talented Johnson earned a starting job in Bump Elliott’s backfield in 1967. In his third start, he broke the Michigan and Big Ten Conference single game rushing record with 270 yards on 26 carries in a 21-26 loss to Navy. Johnson finished the season with 982 yards on 210 carries. He averaged 4.7 yards per carry and scored 6 touchdowns. He earned All-Conference honors with his stellar play and was named the Most Valuable Player of the 1967 Michigan Football team. Unfortunately, the Wolverines ended the season with a final record of 4 wins and 5 losses.

Captain Ron Johnson was back for his senior season in 1968. He was the first African-American captain in the history of the Michigan Football program. He was also a marked man because he was the best running back in the Big Ten. Defensive coordinators stayed up late during “Michigan Week” because they had to have a good plan to stop Ron Johnson.

As it turned out, only two teams really stopped Ron Johnson in 1968. He only rushed for 48- yards against California and totaled 51 against Illinois. He gained 84-yards against Minnesota and 91 at Ohio State. Ron also had four 100-yard games along with one 200-yard game and his best – a 347-yard effort against Wisconsin. Yes, he had a great season. Johnson’s outstanding season helped Michigan finish with a record of 8 wins and 2 losses.

The best way to summarize Ron Johnson’s illustrious Michigan career is to document some of the important “firsts” that connect him to Michigan Football.

Yes, Ron Johnson was a great player and a better man. He quietly waited his turn, then, went on to enjoy a record-setting Michigan Football career. Today is a wonderful day to appreciate Mr. Johnson’s contributions to the great history of Michigan Football. To read more about Ron Johnson’s life in the NFL check out the link below. Sadly, if you read the article below, Ron Johnson’s 70th birthday celebration will probably not be as happy as he, and his family, would like. If you are the “praying type” a nice prayer for Ron, and his family, would be a good thing for this great Michigan Man today. Go Blue!