Posted on November 8, 2019 by Barry Gallagher

(Note: Harry Banks (#20) and Larry Banks (#32) are shown above (first row, right side) in the 1974 Michigan Football team photograph. Photo courtesy of the Bentley Historical Library at The University of Michigan.)

Part I. Wolverines of the Day: Harry and Larry Banks

Harry Banks was recruited as a running back by Bo Schembechler and his staff in 1970. No, Harry wasn’t the biggest guy in his recruiting class (5 feet 10 inches and 185 pounds), but he was tough and very fast. Banks arrived in Ann Arbor in the summer of 1970. Harry played on the freshman team during his first year and worked hard to crack the starting lineup as a sophomore.

The hard-running Banks didn’t earn any starts in at tailback in 1971, but he had at least one carry in six games. Harry averaged 5.2 yards per carry and scored 4 touchdowns in his first year on the varsity. Michigan finished the season with a final record of 11-1-0 and went 8-0-0 in the Big Ten. The Wolverines won the conference championship and Harry earned his first letter. Harry Banks (#20) earned starts as a running back and a defensive back for Bo Schembechler from 1971 to 1974. Photo courtesy of the Bentley Historical Library at The University of Michigan.

Harry Banks was back in 1972. Harry earned four starts at tailback in 1972. Banks totaled 70 carries and 273-net yards in nine games. His averaged 3.9 yards per carry and scored 1 touchdown. The Wolverines ended the season with a final record of 10-1-0 and went 7-1-0 in the Big Ten. Michigan earned a share of the conference championship and Harry earned his second letter. Actually, there was more good news for Harry because his brother Larry took advantage of a new Big Ten redshirt rule and transferred to Michigan from Grand Rapids Junior College in 1972.

Unfortunately, Harry Banks broke his hand in 1973 and was out for the season. The good news was that he got a medical redshirt and returned for his final season in 1974. With Harry back to full health, Harry and Larry Banks would be playing together on the same football team again in 1974.

Harry and Larry Banks Played Together in 1974

As it turned out, Michigan’s offensive backfield was loaded in 1974, but not their defensive backfield. So, Harry Banks was asked to move from tailback to defensive back. Harry started eleven games at the strong safety position in his final season. He registered 36 tackles (18 solo and 18 assists) and also picked off two passes. Of course, he earned his third varsity letter

Although he didn’t letter in 1972 or 1973, Larry Banks impressed everyone in Spring Drills in 1974. His size (6 feet 2 inches and 230 pounds) combined with tremendous speed and mobility made him a strong player at the rush end position. Larry started nine games at defensive end and recorded 45 tackles (30 solo and 15 assists) for the Wolverines. He also recovered a fumble and earned his first varsity letter in 1974. 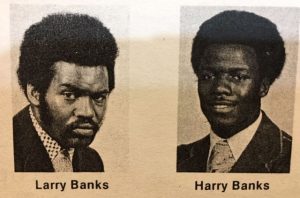 Larry and Harry Banks played for Bo Schembechler in the early 1970s. Photo courtesy of the 1974 Michigan Football Media Guide.

The Banks Brothers Were Big Ten Champions in 1974

The best news for the Banks brothers was that they played on Michigan’s Big Ten Co-Champion football team in 1974. The Wolverines posted a final record of 10 wins and 1 loss and went 7-1-0 in the conference.