The purpose of today’s blog is to wish a very happy birthday to a Michigan Man named Rick Leach. The tough and talented Richard Max “Rick” Leach was born on this date in Ann Arbor,  Michigan. Leach was an outstanding athlete at Flint Southwestern High School in Flint, Michigan. He was an All-State quarterback and also earned Saginaw Valley All-Conference honors in Basketball and Baseball. He was good enough to get a scholarship offer from Bo Schembechler and he was smart enough to take it!

Part I. Wolverine of the Day: Rick Leach 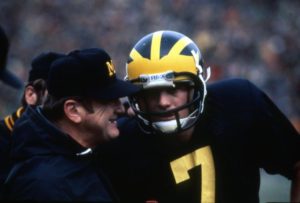 Bo Schembechler shocked a lot of people when he named freshman Rick Leach as his starter in 1975. It turned out to be a great decision - got it? Photo courtesy of the Bentley Historical Library.

Rick Leach enrolled at Michigan in the fall of 1975 and did something as a freshman that no man had ever done for Bo Schembechler. He started at quarterback for the demanding Wolverine football leader.  In fact, he started 11 of 12 games that season and helped lead Michigan to an overall record of 8-2-2 in his first year. The Wolverines ended with a final record of 7 wins and 1 loss in the Big Ten which was only good enough for second place.

A more confident Leach came back in 1976 to lead Schembechler’s offense for a second season. Leach started all twelve games of the season and played very well. He was really getting a handle on Bo’s option offense and he achieved impressive numbers in the passing game and the running game. Leach totaled 1,611 yards of offense in 1976 and became the first Wolverine to average 7.4 yards per play. He earned first team All-Conference honors for his excellent play. Leach’s second Michigan team won 10 of 12 games and tied for the Big Ten Co-Championship with a record of 7-1-0. Even as a freshman, Rick Leach was the perfect guy to run Bo’s “Option Offense” in 1975. He could run and throw and did both very well from 1975 to 1978. Photo courtesy of the Bentley Historical Library.

Leach Continued His Strong Play in 1977

Rick Leach came back stronger and ready to play even better in 1977. He started 12 of 12 games and continued to roll up impressive yardage in the passing and the running game. He totaled 1,723 yards on 289 plays and averaged 6.0 yards per play. For the second straight year, he was selected as a first team All-Conference quarterback. The Wolverines finished with a final record of 10-2-0 and won another conference co-championship with a record of, you guessed it, 7-1-0.

In 1978, Rick Leach was one of the best quarterbacks in the country. He became the first Michigan signal caller to amass 1,894 yards of total offense, breaking Don Moorhead’s record of 1,886 in 1969. Leach, as Bob Ufer would say, was the “Guts and Glue of the Maize and Blue.” He did it all for Bo offense. For the third straight year, the Wolverines ended the season the same way they finished the last two. They finished the regular season at 10-2-0 and the Big Ten with a record of 7-1-0 and a third consecutive Big Ten Championship.

Rick Leach earned a ton of awards for his stellar play in 1978. First, he was selected as the Most Valuable Player of the Michigan Football team. Second, he was named the first-team All-Big Ten quarterback for the third straight year. He also earned the Big Ten MVP Award. Third, he was selected as an All-American quarterback. Finally, he finished third in the balloting for the Heisman Trophy. Rick Leach scores against Notre Dame in 1978. Michigan won the first game played against the Irish since 1943. Photo courtesy of the Bentley Historical Library.

In addition to playing on some outstanding Michigan teams, Rick Leach is also associated with some Michigan Football “firsts.” Here are the best ones that I could find:

So, today is a good day to remember the outstanding Michigan career of Rick Leach. As Bob Ufer would say, Rick Leach was a “peach” of a quarterback and leader for the Wolverines. Of course, he also had an excellent baseball career at Michigan and then as a professional with the Detroit Tigers. I hope that Rick Leach has a  Maize and Blue Happy Birthday today! Thanks for the memories #7 and Go Blue!

Thanks to Dr. Sap for this Rick Leach highlight video!

To read more about Rick’s professional career and other life accomplishments go to the links below: