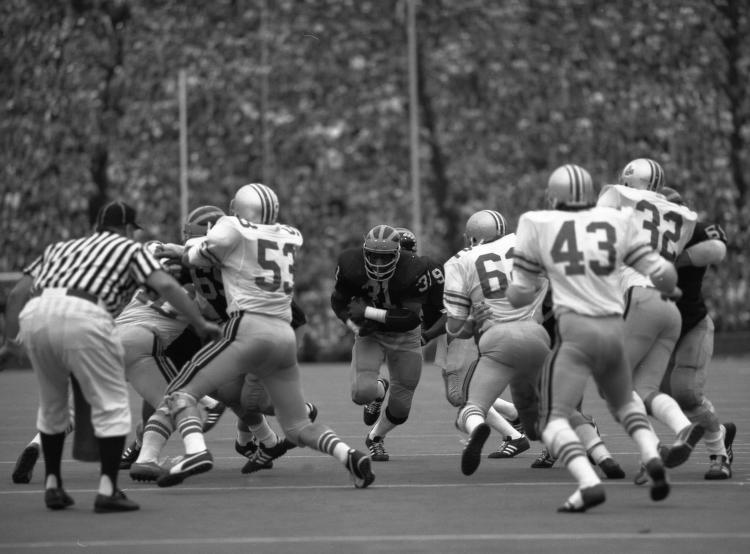 Today’s post celebrates the Happy Birthday Anniversary of a hard-hitting fullback named Ed Shutlesworth. According to the Wikipedia article linked below, Edward “Ed” Shuttlesworth was born in Cincinnatti, Ohio. Yes, he was another Buckeye who saw the light and came to play football for Bo Schembechler at Michigan.

(Note - Ed Shuttlesworth was a classic Bo fullback. He got the tough yards when needed and blocked everything in sight! Photo courtesy of the Bentley Historical Library at The University of Michigan.)

Part I. Wolverine of the Day: Ed Shuttlesworth

Ed Shuttlesworth arrived in Ann Arbor in 1970. Freshman did not play during this era, so his job was to learn how to be a good student and learn how Bo’s Michigan Football System worked. Young Shuttlesworth learned both lessons very well. He didn’t start any games as a sophomore, but had at least nine carries in every game of the twelve-game season in 1971. Ed logged 182 carries for 875-yards and averaged 4.8 yards per carry. He also recorded his first 100-yaard rushing game against Virginia (107-yards) in his second game and got two more before the season was over! Shuttlesworth also scored six touchdowns and earned his first letter in 1971. The Wolverines were undefeated in the regular season (11-0-0) and the Big Ten (8-0-0). Unfortunately, Bo’s footballers lost to Stanford (12-13) in the Rose Bowl to finish with a final record of 11 wins and 1 loss.

Shuttlesworth worked hard in the off-season and came back ready to play more for Bo in 1972. He earned eight starts in 1972. Shuttlesworth recorded three more 100-yard games in 1972 and rushed for 11-touchdowns. He carried the ball 157 times and gained 713-yards. Ed Shuttlesworth earned his second letter and was named first team All-Big Ten for his outstanding season. Michigan ended the season with a final record of 10 wins and 1 loss. They earned a share of the Big Ten Championship with a record of 7-1-0. Ed Shuttlesworth(#31)  was a hard-running fullback for Bo Schembechler in the early 1970s. Photo courtesy of the Bentley Historical Library at The University of Michigan.

A Punishing Runner and a Devastating Blocker

Bo had an easy job in 1973. All he had to do was pencil in Edward Shuttlesworth as the starting fullback for every game!  Shuttlesworth had another excellent season in his senior year. He rushed 157 times and totaled 745-yards. He scored 9 more touchdowns and earned All-Big Ten honors for the second consecutive season.

Ed Shuttlesworth saved one of his best games for last. He ran 27 times for 116 yards in the infamous 10-10 tie against the Buckeyes. It was the third best effort of his career, but it wasn’t enough to earn a victory for the Wolverines. Michigan finished the season with an undefeated record of 10-0-1 and tied with the Buckeyes for the conference championship with a record of 7-0-1. Of course, OSU went to the Rose Bowl and Bo went nuts about the “injustice” that resulted from the athletic director vote in November 1973.

Ed Shuttlesworth was a member of some outstanding teams during his time at Michigan. From 1971 to 1973 the Wolverines posted a record of 31 wins, 2 losses and 1 tie. Their body of work in the Big Ten Conference was exceptional (22-1-1). Shuttlesworth finished his career with three letters, three Big Ten Championships and two seasons of All-Conference level play. Looking back, it was one of the best three-year records in modern Michigan Football history!

I will always remember Ed Shuttlesworth as a pile-driving fullback and a devastating blocker who gave his all for Michigan. As Jim Harbaugh might say, Shuttlesworth was a “jackhammer.” So, that sums it up for today’s post. I hope that Ed Shuttlesworth has a really Happy “Maize and Blue” Birthday today. Go Blue!

You can read more about the life of Ed Shuttlesworth by going to the Wikipedia links below.